The chemokine CCL5 and its receptor CCR5 play important roles in cancer invasion and metastasis. Based on our knowledge, our results were the first that presented the diagnostic usefulness of CCL5 and CCR5 in breast cancer (BC) patients, based on receiver operating characteristic (ROC) curve analysis. We wished to examine further if CCL5 and CCR5 are appropriate to be applied as BC markers for early screening. Values of tested parameters in patients’ plasma were determined by CMIA method (Chemiluminescent Microparticle Immunoassay, CA 15-3) as well as by ELISA method (Enzyme-Linked Immunosorbent Assay, CCL5 and CCR5). Levels of CCL5 in the plasma were markedly increased, while those of CCR5 were remarkably lower in BC patients when compared to the control groups. Moreover, higher levels of CCL5 in BC corresponded to advanced tumor stage, while the levels of CCR5 decreased with increasing the disease stage. CCL5 concentration was characterized by high sensitivity (SE) (68.04%) and high specificity (SP) (100.00%) in the BC patients. Results indicated that area under the curve (AUC) corresponding to CCL5 (0.8116) had a higher value than this corresponding to CA 15-3. The AUC value of CCL5 was significantly increased in the early phase of BC (stage I – 0.7089; stage II – 0.8313). The maximum range in the BC patients was observed for the combined analysis of the tested measurands with CA 15-3 (0.8335). In conclusion, our research indicates that examination of plasma CCL5 and CCR5 may be useful in BC diagnosis at the early stage of the disorder, especially when combined with
CA 15-3. 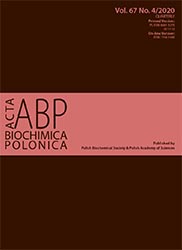