Kininogens are multifunctional proteins involved in a variety of regulatory processes including the kinin-formation cascade, blood coagulation, fibrynolysis, inhibition of cysteine proteinases etc. A working hypothesis of this work was that the properties of kininogens may be altered by oxidation of their methionine residues by reactive oxygen species that are released at the inflammatory foci during phagocytosis of pathogen particles by recruited neutrophil cells. Two methionine-specific oxidizing reagents, N-chlorosuccinimide (NCS) and chloramine-T (CT), were used to oxidize the high molecular mass (HK) and low molecular mass (LK) forms of human kininogen. A nearly complete conversion of methionine residues to methionine sulfoxide residues in the modified proteins was determined by amino acid analysis. Production of kinins from oxidized kininogens by plasma and tissue kallikreins was significantly lower (by at least 70%) than that from native kininogens. This quenching effect on kinin release could primarily be assigned to the modification of the critical Met-361 residue adjacent to the internal kinin sequence in kininogen. However, virtually no kinin could be formed by human plasma kallikrein from NCS-modified HK. This observation suggests involvement of other structural effects detrimental for kinin production. Indeed, NCS-oxidized HK was unable to bind (pre)kallikrein, probably due to the modification of methionine and/or tryptophan residues at the region on the kininogen molecule responsible for the (pro)enzyme binding. Tests on papain inhibition by native and oxidized kininogens indicated that the inhibitory activity of kininogens against cysteine proteinases is essentially insensitive to oxidation. 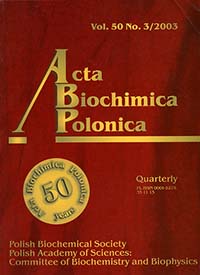