Zeaxanthin epoxidase (ZEP) plays an important role in xanthophyll cycle which is a process closely related to photosynthesis. However, an impact of ZEP on low-light stress has not been studied. In this study, the functions of an alfalfa (Medicago sativa) zeaxanthin epoxidase gene, MsZEP, in response to low-light stress were investigated by heterologous expression in tobacco (Nicotiana tabacum). Under normal light conditions, the measured parameters were not significantly different between transgenic and wild-type (WT) plants except for non-photochemical quenching value and chlorophyll a content. However, the differences were detected under low-light stress. We found that MsZEP-overexpression tobacco grew faster than WT (p≤0.05). The leaf fresh weight and leaf area of transgenic plants were significantly higher, and the number of stomata was greater in MsZEP-overexpression tobacco. As for photosynthetic characteristics, quantum yield of PSII (ΦPSII) and maximal photochemical efficiency of PSII (Fv/Fm) were not significantly different, whereas non-photochemical quenching (NPQ), net photosynthetic rate (Pn), stomatal conductance (Gs) and transpiration rate (Tr) of MsZEP-overexpression tobacco were significantly higher than in WT plants. However, no significant difference was detected between the two types of tobacco in chlorophyll and carotenoids content. In conclusion, MsZEP can improve the ability of tobacco to withstand low-light stress, which might be due to its stronger photosynthetic activity and the improvement of stomatal density under low light.

*Equally contributed to this paper

In both higher plants and green algae, the xanthophyll cycle is involved in thermal energy dissipation, the main way of removal of the excess light energy (Hieber et al., 2000; Bugos et al., 1998; Demmig-Adams & Adams, 1996; Yamamoto & Higashi, 1978). In this cycle, there are three pigments to interconvert, including zeaxanthin (Zx), antheraxanthin (Ax) and violaxanthin (Vx) and two enzymes, zeaxanthin epoxidase (ZEP) and violaxanthin de-epoxidase which catalyze the cycle. Plants can dissipate excess light energy through these three components conversion. Zeaxanthin epoxidase (ZEP) is an important enzyme which catalyzes the conversion of Zx to Ax and Vx. This reaction is performed mainly under low light, while it weakens and even vanishes under strong light (Schwarz et al., 2014; Wang et al., 2008; Frommolt et al., 2001). The conversion is closely related not only to xanthophyll cycle but also to ABA biosynthesis and carotenoid biosynthesis (DellaPenna & Pogson, 2006; Nambara & Marion-Poll, 2005). ZEP gene was studied in various plants including Arabidopsis (Barrero et al., 2005; Xiong et al., 2002), Nicotiana plumbaginifolia (Audran et al., 1998; Marin et al., 1996), tomato (Wang et al., 2008) and rice (Agrawal et al., 2001), but these studies mainly focused on the role of ZEP in ABA biosynthesis, during osmotic or strong-light stress and during seeds development. However, little is known about its response under low light.

Alfalfa is a major legume forage in the world because of its high nutritional value, high yield and wild adaptability. We previously isolated a ZEP gene from alfalfa and studied its role in transgenic tobacco under drought and salt stress (Zhang et al., 2016). Xanthophyll cycle is closely related to photosynthesis and photoinhibition under low light and ZEP is involved in this cycle. Therefore, we further studied the physiological function of this gene in response to low-light stress using MsZEP-overexpression Nicotiana tabacum plants.

Plant material and treatments. Wild-type (WT) tobacco (Nicotiana tabacum) and the MsZEP-overexpression line (Line 3) were previously described (Zhang et al., 2016). Seeds of these two lines were surface-sterilized with 75% ethanol for 30 s, and 0.5% sodium hypochlorite solution for 10 min and then rinsed with sterile distilled water 4–5 times. Seeds of MsZEP-overexpression tobacco were germinated and grew on Murashige and Skoog medium (Murashige & Skoog, 1962) with 0.35% plant phytagel and 30 mg/L hygromycin B at 24°C under 16-h photoperiod for two weeks, and seeds of WT grew in the same conditions but without hygromycin B. These 14-day-old seedlings were transplanted to plastic pots filled with sandy soil and divided into two groups at random. One group was grown at 25°C and 40 μmol m–2 s–1 for 3 weeks before the transfer to 25°C and 200 μmol m–2 s–1. The other group was grown at 200 μmol m–2 s–1. After growing in soil for 6 weeks, plants were harvested and immediately frozen in liquid nitrogen and stored at –80°C until use.

Growth measurements. The leaves of WT and MsZEP-overexpression tobacco were harvested after two different treatments. Leaf fresh weight and area for each tobacco plant group were measured with electronic scales and a leaf-area meter, respectively. The density of stomata was calculated using a optical microscope.

Pigments measurements. Leaf pigments concentrations (Chl a, Chl b, carotenoids) were determined spectrophotometrically according to Arnon (1949) by homogenizing tissue in 80% acetone. Extract absorbance was measured at the wavelength of 645, 663 and 470 nm with 5100UV spectrophotometer (Shanghai, China).

Statistical analysis. All data are presented as the means ± standard errors (S.E.) from three biological replicates of each experiment. Statistical significance was calculated using Student’s t-test. The significant differences among various treatment groups are represented by ‘*’ for p≤0.05 and ‘**’ for p≤0.01. Analyses were performed with IBM SPSS Statistics 18.0 software. Figures were created using SigmaPlot 10.0 (Systat Software, Inc., Germany).

Light intensity plays an important role in plants growth and development (Pan & Guo, 2016). Under the maximum light intensity required by plants, the plant productivity decreased by 1% when the light intensity dropped by 1% (Wilson et al., 1992). We observed that low light decreased the growth rate of tobacco, whereas overexpressing MsZEP enhanced the ability of tobacco to withstand the low-light stress (Fig. 1). 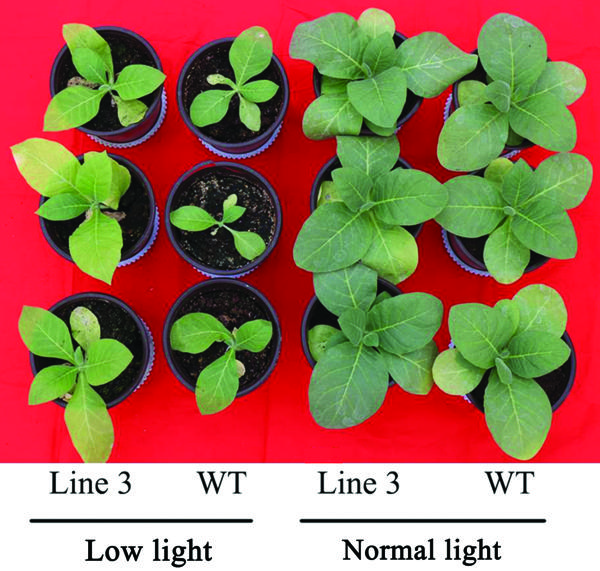 Figure 1. Effect of weak-light stress on the growth of WT and transgenic plants.

To further understand the effect of weak-light stress on the growth of both tobacco types, we determined the leaf fresh weight, the number of leaves, and leaf area. We found that the leaf fresh weight (Fig. 2a) and leaf area (Fig. 2b) of both MsZEP-overexpression and WT tobacco decreased dramatically after weak-light treatment, but the leaf weight and leaf area of MsZEP-overexpression tobacco were significantly higher than in WT lines. The number of leaves of transgenic plants was higher than in wild-type (Fig. 2c). Some research reported that leaves in low light are larger than leaves in high light (Lichtenthaler et al., 1981; Bjorkman et al., 1972).

Figure 2. Effect of weak-light stress on leaf characteristics of WT and transgenic plants.

The number of stomata 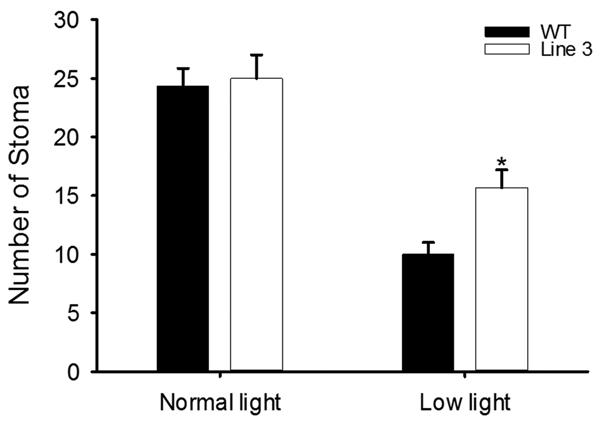 Figure 3. Effect of weak-light stress on the density of stomata of WT and transgenic plants.

To investigate the effect of MsZEP gene on photosynthesis levels after weak-light treatment, photosynthetic activity of wild-type and transgenic tobacco was assessed. As shown in Fig. 4, the maximum quantum efficiency of PSII (Fv/Fm) value and quantum yield of PSII (ΦPSII) value of the two plant types decreased after weak-light treatment, indicating a decrease in the rate of light energy conversion (Fig. 4a and 4b). This contributes to the decline of photosynthetic ability. However, the difference in ΦPSII and Fv/Fm between WT and MsZEP-overexpression tobacco was not significant, neither under normal nor low light (Fig. 4a and 4b). 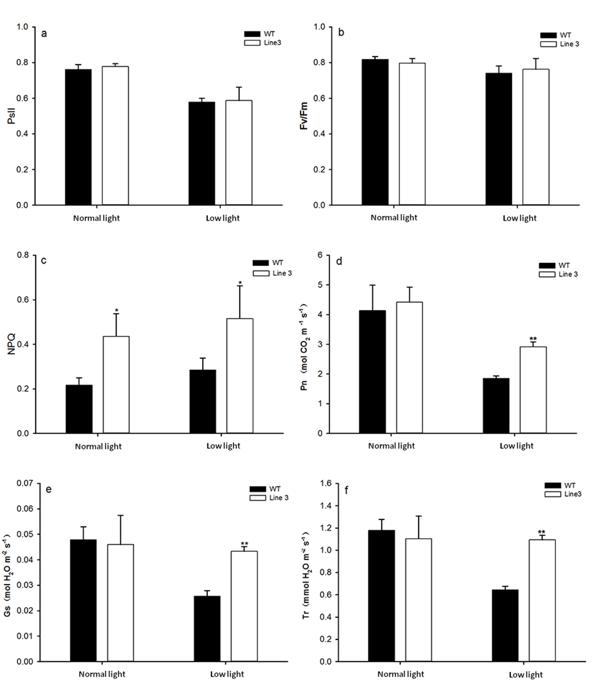 Figure 4. Effect of weak-light stress on the photosynthesis of WT and transgenic plants.

Xanthophyll cycle is tightly related to the dissipation of excess light in plants, and NPQ represents the energy which cannot be utilized in photosynthesis and is dissipated harmlessly as heat energy (Veres et al., 2006; Müller et al., 2001; Vasil’ev et al., 1998). In our research, when plants were grown in normal-light condition after the low-light treatment, NPQ increased in both wild and MsZEP-overexpression tobacco, reaching 18.22% and 30.65%, respectively (Fig. 4c). In addition, the NPQ of MsZEP-overexpression tobacco was always higher than in wild-type under both conditions (p≤0.05) (Fig. 4c). Xanthophyll-cycle pigments (Vx, Ax, Zx) are involved in the process of NPQ of chlorophyll fluorescence which is the most important mechanism of photoprotection (Demmig& Adams, 1991). The increase of NPQ value may be due to the expression of MsZEP in transgenic plants. This indicates that overexpressing MsZEP may improve plants’ sensitivity to light. Similar results were observed for zeaxanthin epoxidase gene in tomato (Wang et al., 2008).

Under normal-light conditions, leaf net photosynthesis (Pn), stomatal conductance (Gs) and transpiration rate (Tr) displayed no significant difference between MsZEP-overexpression and WT tobacco (Fig. 4d, 4e and 4f). When plants were exposed to low light level, Pn decreased significantly, but in transgenic plants was higher than in WT (p≤0.01) (Fig. 4d), which suggests that overexpressing MsZEP enhances the photosynthetic ability under weak light. The changes of Gs and Tr were similar to Pn (Fig. 4e and 4f). The higher stomatal density of MsZEP-overexpression tobacco may lead to the higher Gs. In addition, the higher Gs can contribute to the higher Pn and Tr. Therefore, the higher stomatal density may benefit photosynthesis and growth of plants.

Chlorophyll absorbs light energy during photosynthesis and the content of Chl a is three times higher than Chl b. Bell reported that the content of chlorophyll decreased under low-light stress applied for a long time (Bell & Danneberger, 1999), while Lakshmi and Singh revealed that the content of both Chl a and Chl b increased and the rate of Chl b increase was higher (Praba et al., 2004; Singh et al., 1988). In the present study, the concentration of Chl a, Chl b and carotenoids in wild-type and MsZEP-overexpression tobacco decreased after low-light stress (Fig. 5). However, the difference between MsZEP-overexpression and WT tobacco was not significant except for chlorophyll a content under normal-light condition. Therefore, MsZEP may enhance the tolerance of tobacco to weak light via other mechanism than by altering chlorophyll and carotenoids levels. 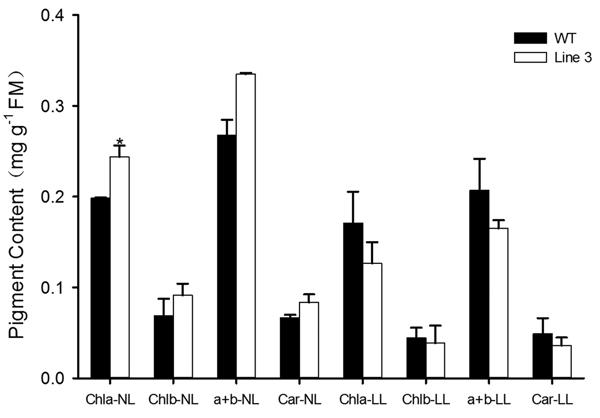 Figure 5. Effect of weak-light stress on pigment content of WT and transgenic plants.

This work was supported by the Project of National Natural Science Foundation of China (31572456; 31772660) and China Agriculture Research System (CARS-34).